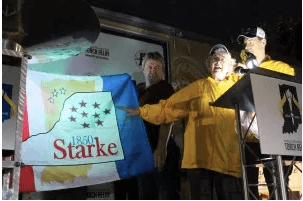 Starke County’s new flag will be raised for the first time today. It was unveiled during Friday evening’s bicentennial torch relay celebration. Melba Shilling and her late husband, Jim, were inspired by a visit a few years ago to Starke County’s “sister courthouse” in Ottawa County, Ohio. Shilling says the county had its own flag flying.

The flag features a total of 12 stars. Shilling says nine are for Starke County’s current townships, and the other three represent the “lost” ones.

“Starke County was supposed to be a rectangle. Well, the people west of the Kankakee River had trouble getting to Knox to pay their property tax, so they petitioned the state legislature to join LaPorte County instead of Starke County. So in 1842 the legislature finally gave our three “lost townships” to LaPorte County.”

“Jim Shilling’s ancestors came here in 1851 from Stark County, Ohio on the canal to Logansport, and then by oxcart to Starke County. Jim was an avid cheerleader for his beloved Starke County. So in his memory, I am presenting four flags to the Starke County Commissioners to be flown at the courthouse and the annex building, beginning with this Indiana Bicentennial year.”

Commissioner Don Binkley accepted the flags on behalf of the county. The first one will be raised this morning at 8:30 during a brief ceremony at the Starke County Courthouse.