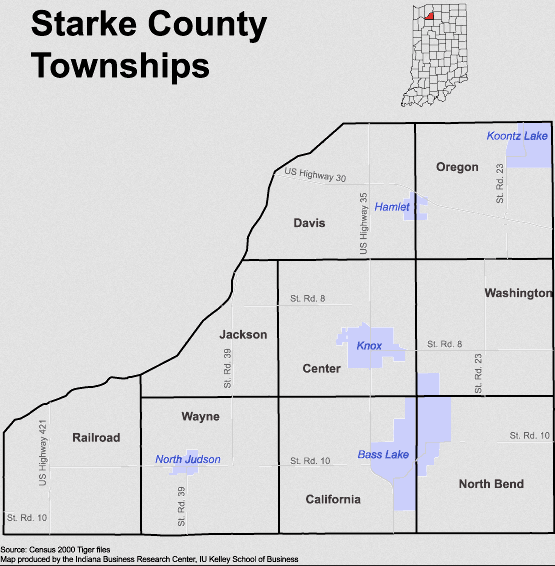 The landscape of Starke County, Indiana was formed more than 12,000 years ago, when the last ice glacier receded from the area. The melting of snow and ice left Starke County, and nearby lands of the area now known as the Kankakee Valley, a flat, slowly-drained marsh and swamp with sandy, wooded knolls and highlands in and around the sides of the valley.

Early inhabitants were hunters and farmers. They lived and farmed on the sandy highlands and fished and hunted in the swamps and marshes.

Drainage work was begun in the early 1900s, allowing most of the area to be productive farmland, with open ditches and underground tile lines. Corn, soybeans, mint, hay, Christmas trees, strawberries, blueberries, vegetables, and other crops provide a source of income for today's farmers.

Before drainage, the Kankakee River expanded in places two miles wide and more than five miles long, creating a body of water known as English Lake. With the coming of drainage, however, the lake no longer exists, although the town of English Lake still remains.

It is believed that the first settler, an Englishman named Edward Smith, lived on land in what is known as Oregon Township in 1835. The first white child was born in North Bend Township in 1835. The first sawmill was built in 1849 at the end of Koontz's Lake, named by Samuel Koontz. He then added a gristmill in 1853, and farmers from all over hauled their grain to be milled into flour and feed.

Starke County was organized in 1850, the next-to-the-last county in the state. Its shape is due to the fact that the mighty Kankakee River is the western boundary of the county, and building a bridge across the river to what might have been the rest of the county posed a serious financial burden. So the area northwest of the river was included in LaPorte County, leaving only nine townships in Starke County. The county was named after the Revolutionary War General, John Stark.

The town of Knox was laid out in April 1850 and became the county seat. North Judson's post office was established on September 24, 1860 as North Judson after Adrian Judson, one of the promoters of the Great Chicago and Eastern Railway (originally the Chicago and Cincinnati Railroad and later part of the Pittsburgh, Cincinnati, Chicago and St. Louis Railroad) which had just been laid through the town.  The town of North Judson proper was later laid out in 1866 and incorporated in 1888. Mail was delivered to Knox and to the village of San Pierre on the Star Route in 1862 under a government contract at $163.00 per year, there being no railroads between the towns at the time.

Three courthouses have served Starke County over the years. The first was a small, primitive structure. The second, built in 1863, was an imposing structure built of wood with colonial columns. In 1897 the present Romanesque-style courthouse was built of architectural limestone, complete with a clock tower that remains as one of the tallest structures in the county.

Two lakes are well-known. Bass Lake (formerly known as Cedar Lake) is the larger and was the playground of the "rich and famous" during the early 1900s. The beach attracts scores of visitors in the summer. Koontz Lake has been revitalized after a devastating tornado dumped houses and debris into the lake in 1965.

The Honorable Henry F. Schricker is one of the best-known citizens to have lived in Starke County. He was born in North Judson, lived in Knox, was a banker, distinguished businessman and twice-elected Governor of Indiana. The Starke County Historical Society's Museum owns the former Schricker home on Main Street in Knox.

Che Mah, the smallest man in the world at 28 inches, retired to Knox after years of traveling with the circus. Born in China in 1838, he came to the United States in 1881 at the age of 43 years. Some of his special clothes and furniture are displayed in the museum.

Starke or Stark? How the county got its name
Courthouses of Starke County
Starke County Flag Unveiled During Bicentennial Celebration