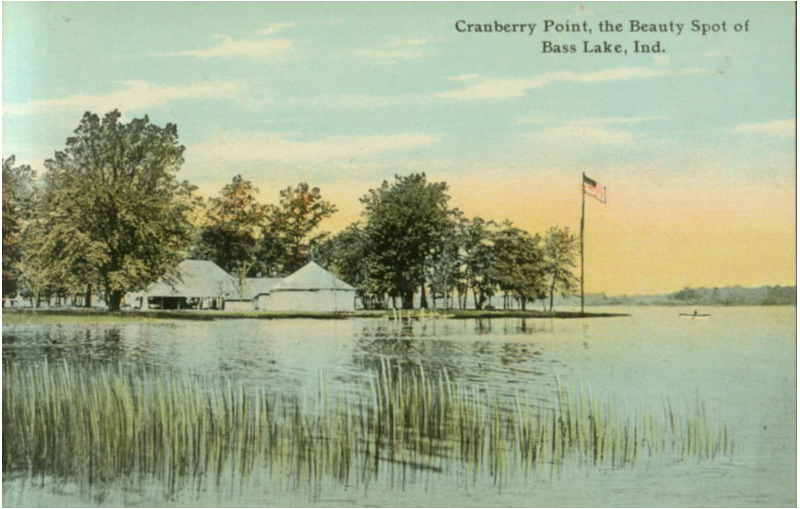 Bass Lake, believe it or not, is a natural lake that stands on top of a hill. Nearly unique among Indiana lakes, its drainage basin slopes away - not toward - the water and how it remains liquid is, at first thought, something of a mystery.

Nevertheless, the lake (located eleven miles north of Winamac on US 35) is Indiana's fourth largest natural body of water and covers more than 1,400 acres. It comes highly recommended for both swimming and fishing.

Seeing the recreational possibilities, in 1931 the state of Indiana built Bass Lake State Beach using long drag lines to pull sand from the lake’s bottom to build the beach.  The beach, covering seven acres, is located along the southeast shore between the water and Indiana 10. Some years ago, the state transferred ownership of the beach to Starke County.

Bass Lake is peculiar among large Indiana lakes because of both its shallowness and its long, sandy beaches. At many points, it is possible to walk long distances from the shore before reaching deep water. Although the lake's maximum depth, as measured in an early geological survey, was 32 feet, the average was less than nine.

Springs that discharge under the surface and a few flowing wells maintain the lake level, which is further guaranteed by an outlet dam set at an altitude determined by the Starke Circuit Court. Since the lake lies atop a sand ridge, its drainage basin extends only a maximum of a few hundred yards and even this is limited by diversion of two ditches that formerly flowed into the lake.

Fish life in Bass Lake is as unusual as its geography. It is the only Indiana lake that has provided reasonably good fishing for walleyed pike over a long period of years and one of only a few in the state in which white bass are numerous enough to afford regular fishing. Large and small mouth bass, crappies, bluegills and perch are other important game fish.

At one time, Bass Lake State Fish Hatchery near the northeast corner of the lake, was a favorite tourist mecca, attracting thousands of persons to its well-stocked breeding ponds. It no longer operates, but is now owned by Purdue University.

Although primarily a summer resort, Bass Lake, many years ago also was a commercial center in winter. The Knickerbocker Ice Company of Chicago cut thousands of tons of ice there, stored it in huge lakeside warehouses and shipped it out on a two-mile-long spur that connected with the Erie Railroad's main line to Chicago.