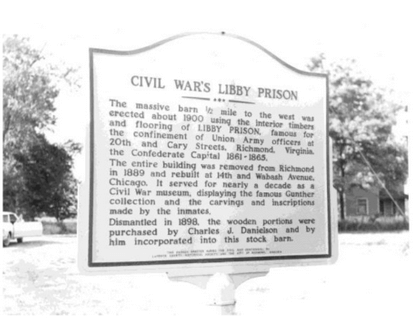 Originally built in 1845, the Confederates used a warehouse owned by Libby & Sons to imprison more than 25,000 Union soldiers in Richmond, Virginia throughout the Civil War.

Living conditions were deplorable and many prisoners died. 6,276 were buried in a cemetery southeast of Richmond. Only 817 graves were marked.

Horrors of the prison became legendary. After the war a doctor who attended to the sick at Libby prison published an article attesting to systematic abuse, neglect, suffering and semi-starvation.

The prisoners had founds ways to carve their names and other messages in the wood timbers. Their carvings were still very visible and stood as a testimony to their suffering many years later.

After the Union Army took control of Richmond, President Lincoln visited Libby prison and refused to have it torn down, preferring to leave it as a monument to the horrors of the war.

The former prison was purchased, disassembled and shipped to Chicago in 1889. There it was rebuilt as the Libby War Museum at 1514 S. Wabash Avenue. Although it was not part of the Columbian Exposition of 1893, it drew large crowds of visitors.

After the Exposition, the Libby War Museum fell upon hard times and was razed in 1899. The Chicago Coliseum was built upon the site and used much of the former prison’s material in its façade. Its bricks, wooden doors and shutters were used to form the north wall of the Chicago Historical Society’s War Room.

Illinois State Senator Charles Danielson of Chicago purchased most of the white oak beams and other timbers. In 1900 he used them to build a large barn on his “White Woman’s Island” farm on CR 900 N. in Starke County. Some of the wood timbers are said to have also been used in a house Danielson built in Hamlet.

Records show that Francis Davis owned “White Woman’s Island Farm” by 1911. The farm was owned by Davis descendants up through the 1960’s.

In 1962 a highway marker was placed on U.S. Hwy 35 at CR 900 N. commemorating the Libby Prison Barn. However, this added to the number of people visiting the barn and taking souvenirs. With concerns rising about desecrating the honor of those imprisoned within its timbers so many years ago, the owners decided to have the barn taken down in 1963. A Charles K. Mercer of Spencer, Indiana purchased the wood and stored it with plans to re-assemble it as a museum, but that never happened.

No one locally in Starke County was ever able to learn the location of the stored timbers and thought they were lost forever; that is until Sue Neikirk of Hamlet became fascinated with the mystery and tracked down their whereabouts.  Click this link https://gaamagazine.wordpress.com/2018/02/09/the-libby-prison-mystery/ to read Sue’s story.  Another site with information is https://civilwarrichmond.com/written-accounts/other-newspapers/3758-1933-11-30-national-tribune-the-timbers-of-libby-prison-are-being-used-in-a-barn-in-hamlet-indiana-owned-by-frank-davis-describes-the-barn-timbers-and-notes-that-many-timbers-are-still-covered-with-initials-of-prisoners .