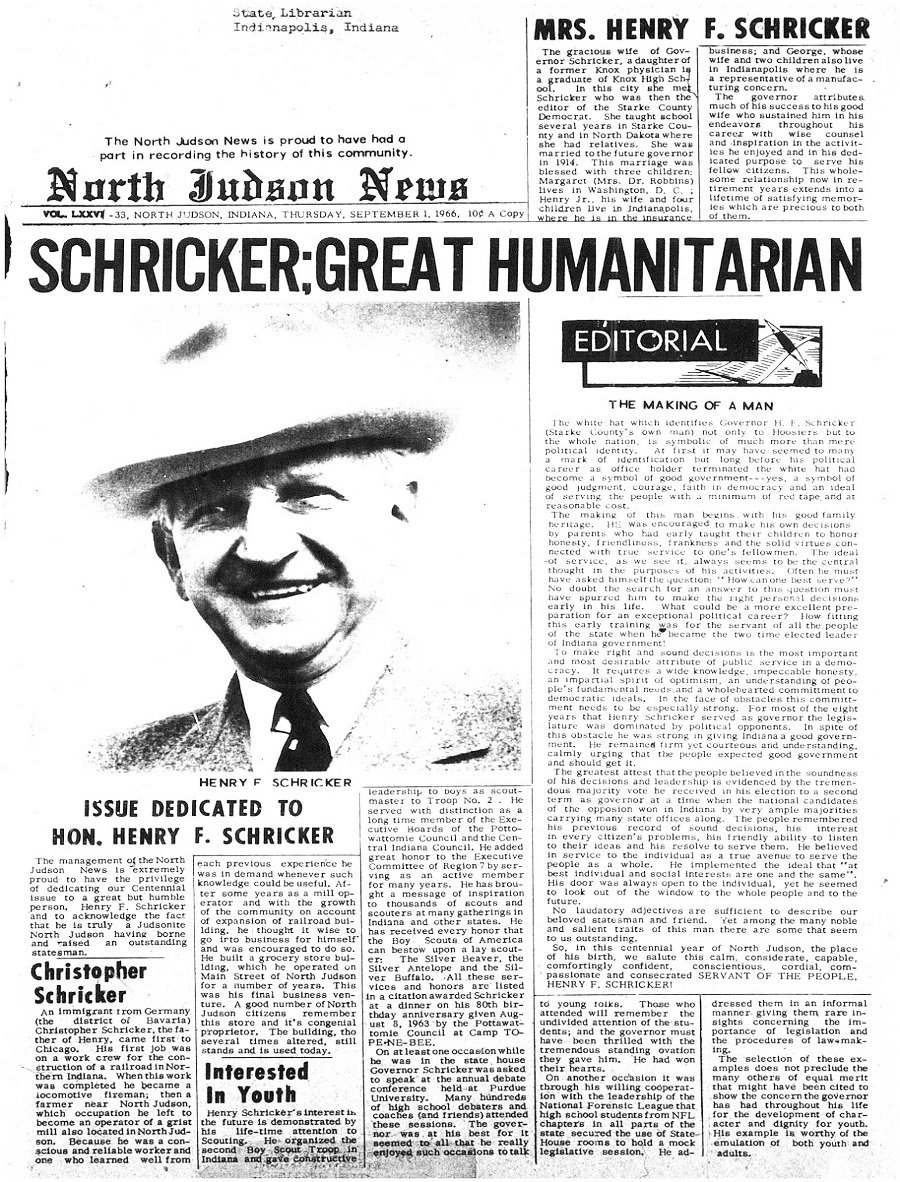 Henry F. Schricker, the first twice-elected governor of Indiana, was born on August 30, 1883, at North Judson, Indiana.  He attended school in North Judson and on finishing his education there, decided to become a lawyer.  He worked in the county clerk's office in Knox for one year and studied law on the side.  After passing the bar examination of those days, he practiced law with his mentor, Adrian Courtright, in Knox.

Governor Schricker then joined the First National Bank of Knox as cashier and remained with the bank until 1932. In the same year he was elected state senator on the Democratic ticket. He was elected Lieutenant Governor in 1936 and in 1940 was elected governor. During the war years he kept a tight rein on the financed of the state and the treasury built up an impressive balance.

Due to his popularity, he was in demand as a speaker and his advice and sanction were sought by Democrat Party Candidates. He was chosen to deliver the nomination speech for Adlai Stevenson at the Democratic National Convention.

The Boy Scouts were among his many interests. In 1912 he organized the first Boy Scout troop in Starke County and devoted many hours to the cause of Scouting over the years. The Governor Schricker Eagle Scout Award Foundation was established in his honor to provide aid to Eagle Scouts who wish to make Scouting their life's work.

Another major contribution to our community was Schricker's work with volunteer fire fighters in the county. Mr. Schricker was fire chief in Knox for a period of time, and under his leadership the Knox Fire Department became one of the most respected in the area.

Early in 1944, a personal emissary from President Roosevelt delivered to Mr. Schricker an oral message from the nation's Chief Executive: "President Roosevelt wants you to run for Vice President. Would you consider being his running mate?" Governor Schricker declined the offer because he was finishing the last year of his term as Governor and he believed his debt of public service to his people demanded his service for the full four years. Someday future historians may speculate as to the course history would have taken if Schricker would have become President, instead of Harry S. Truman.

But there was more to Maude than her gracious public image would have suggested. At the age of 18, having already taught at a one room country school in Jackson Township, she moved west to North Dakota to homestead 160 acres. There she lived alone in a pioneer cabin, while teaching school and fulfilling her 3 year residency requirement to obtain deed to the land. Her companions were her pony, Brownie, her dog, Dewey, and her Stevens rifle. Many years later the sale of this land would put her children through college.

Young Henry Schricker never forgot the girl he saw taking her cow out to pasture at the edge of Knox as he walked the railroad tracks to his job at the county clerk’s office. During the summer of 1914, Henry visited Maude in North Dakota and convinced her to move back to Knox. On October 21, 1914, they were united in marriage and honeymooned 3 days in Indianapolis.