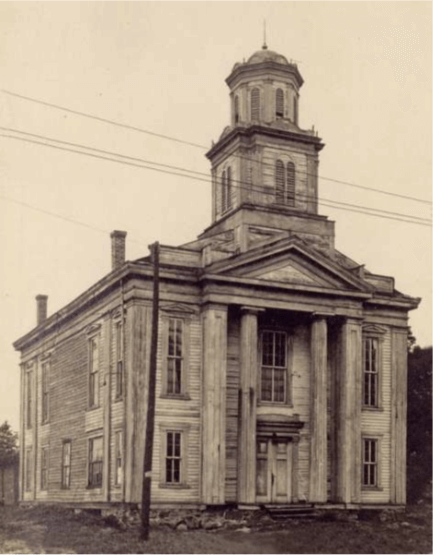 At the time Starke County was organized on April 1, 1850, county business was conducted in the log home of Jacob Tillman, county treasurer, located on the north side of Water Street in Knox. A stone with a brass plate marks this location.

In March 1851, the commissioners awarded a contract to Thomas D. Spoor to build a new courthouse for $475. The small frame structure was located on lot 33 on the southeast corner of Mound and Pearl Streets, built from lumber sawed from trees on the site. This is recognized as the first courthouse.

A second courthouse was started in 1857 and completed in 1863. It was an imposing structure with colonial columns and bell tower, built on the public square where the present courthouse stands. The bid to construct the building was awarded to George Brown at a cost of $9,000. However, he was unable to finish it and a contract was given to Christian Hillabold to complete the building for wages of $2 per day. The final cost was $20,000. This is the courthouse pictured on this page.

Under the direction of county commissioners William Collins, William Miller and Fred Vergin, along with the architectural firm of Wing and Mahurin of Fort Wayne, Indiana, and contractors Caldwell and Drake of Columbus, Indiana, construction of the present courthouse began in the spring of 1897.

As work progressed, the county commissioners began making plans for a cornerstone laying ceremony, setting a date of July 3rd, 1897. The exterior of the building at this point was completed to the first floor only, where the cornerstone would be placed in the northeast corner.

The North Judson Masonic Lodge No. 438 F. & A.M. was in charge of laying the cornerstone and the ceremony was led by "Grand Marshal" Aug. H. Knosman. As befitting such an important occasion, plans were made for a special ceremony with a full parade and the depositing of articles of historical interest in the time capsule of the cornerstone.

In 1997, Starke County celebrated the Starke County Courthouse Centennial with special ceremonies on July 3rd-6th to commemorate this festive occasion. Bands played, people marched in the parade and tours were given to the top of the courthouse bell tower. The cornerstone was opened and the contents are now on display. A new time capsule was placed in the corner stone and dedicated for the next 100 years.

As one looks back at the past 100 years, it becomes increasingly clear that the citizens of today are greatly indebted to those past leaders who had the foresight, courage, and open-mindedness that provided the heritage we are privileged to enjoy today. Through their ideas, time, and dedication, Starke County boasts one of the most beautiful and well preserved courthouses in the State of Indiana.

Overview of Starke County
Starke or Stark? How the county got its name
Starke County Flag Unveiled During Bicentennial Celebration